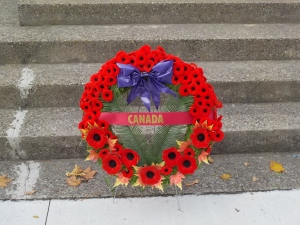 Today, November 11th 2020, we mark Remembrance Day in Canada and the sacrifices made by our military during the many conflicts Canada has been involved in.

Canadians have a long tradition of joining its allies in conflicts when required and to successfully fight in many difficult situations in order that we all may enjoy the freedoms that we enjoy today.

This year also marks the 75th anniversary of the end of the Second World War.

November 11th also marks the 102st anniversary of the armistice that ended the First World War.

So, if you are grateful for the freedoms we enjoy in Canada, please thank a veteran.

As an appropriate remembrance for all the sacrifices, here is “In Flanders Fields“, the poem written by Canadian Lieutenant Colonel John McCrae:

In Flanders fields the poppies blow
Between the crosses, row on row,
That mark our place; and in the sky
The larks, still bravely singing, fly
Scarce heard amid the guns below.

We are the Dead. Short days ago
We lived, felt dawn, saw sunset glow,
Loved and were loved, and now we lie
In Flanders fields.

Take up our quarrel with the foe:
To you from failing hands we throw
The torch; be yours to hold it high.
If ye break faith with us who die
We shall not sleep, though poppies grow
In Flanders fields.

Canada remembers the sacrifices of all our military personnel, especially those who paid the ultimate sacrifice.  Your duty and sacrifice will not be forgotten.

I am a long time condo activist and have a background in Business Administration.
View all posts by Edward Brain →
This entry was posted in General and tagged #CanadaRemembers, #LestWeForget, #RemembranceDay, #ThankAVeteren, 2020, Dominion of Canada, In Flanders Fields, Lest We Forget, Remember Them, Remembrance Day, Second World War, The Great War, Treaty of Versailles, World War 1, World War II. Bookmark the permalink.