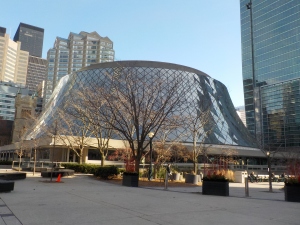 I attended the February 2nd 2019 concert at the TSO which was advertised as “Sir Andrew Conducts Wagner”.  The concert happened to also fall on Sir Andrew’s 75th birthday.

The concert opened with a surprise performance of ‘Happy Birthday’ for Sir Andrew.  As Sir Andrew went to start performing the Ride of the Valkyries, the TSO quickly changed from the opening bars of the Ride to Happy Birthday with members of the Toronto Mendelssohn Choir (seated in street wear in the choir section of the auditorium) singing.  Sir Andrew was extremely thankful and and moved:

(Disclaimer: Please not that I did not take this video.)

Now onto the concert itself:

The Ride of the Valkyries was incredibly moving with a speedy tempo that made one feel like we were flying along with the Valkyries.

Sir Andrew introduced Albert Berg’s Three Pieces for Orchestra.  While rarely performed due to the large orchestra required, the work was better overall than I expected.  The first movement (Präludium) sounded more like an orchestra being tuned for the most part, and is the weakest of the three pieces.  The  following movements (Reigen and Marsch) were far more moving and interesting, especially Marsch.  While I would not state that I love Berg’s Three Pieces, as Sir Andrew hoped I did at least finding it interesting for the most part and certainly something I would not have gone out of my way to have listened to before.  It will likely never go down as one of my favourite orchestral pieces, it was at least different and was interesting.

Following an intermission we were treated with the first act of Die Walküre.  The performance was conducted with an upbeat tempo that did not sound fast but kept moving.   We could feel all the emotions of the characters and the soloists were all in top form.  Mr. O’Neill sang with a lyrical sound that I am not used to hearing from a Siegmund – yet the power was there for his ‘Wälse! Wälse!’ calls and when he hit the ‘Wälsungen’ in the last line of the act (‘so blühe denn, Wälsungen Blut!’)

Ms. Davidsen’ Sieglinde was tender and moving.  She was more than happy falling in love with Siegmund and getting away from her loveless marriage to Hunding.  I heard a possible future Brünnhilde in her future.

Mr. Sherratt has come to Wagner later in his career and this is one of his first performances of Hunding.  Yet you would never know this – his powerful voice makes you fear him and shows that he is not scared of Siegmund.

Sir Andrew’s conducting is second to none.  He knows how to get the best out of the TSO and we heard some of that tonight in the performance.  When the performance finished everyone received a well deserved standing ovation – although I for one did not want the performance to end – I was so enthralled with the music.

The evening was memorable and I will not forget it anytime soon!

Sir Andrew Davis and the soloists in discussion with the Toronto Wagner Society after a rehearsal for the concert.