October 31st, 2020 has been declared ‘John Candy Day’ in Toronto in honour of what would have been the comedian’s 70th birthday.

John Candy was born on October 31st, 1950 in Newmarket, Ontario, and grew up in East York, now part of the City of Toronto.  He came to fame as a comedian as a member of the Canadian version of the SCTV series.

Originally, Mr. Candy planned to play football, but was sidelined with a knee injury.  He studied journalism at Centennial College, and was introduced to theatre while there. 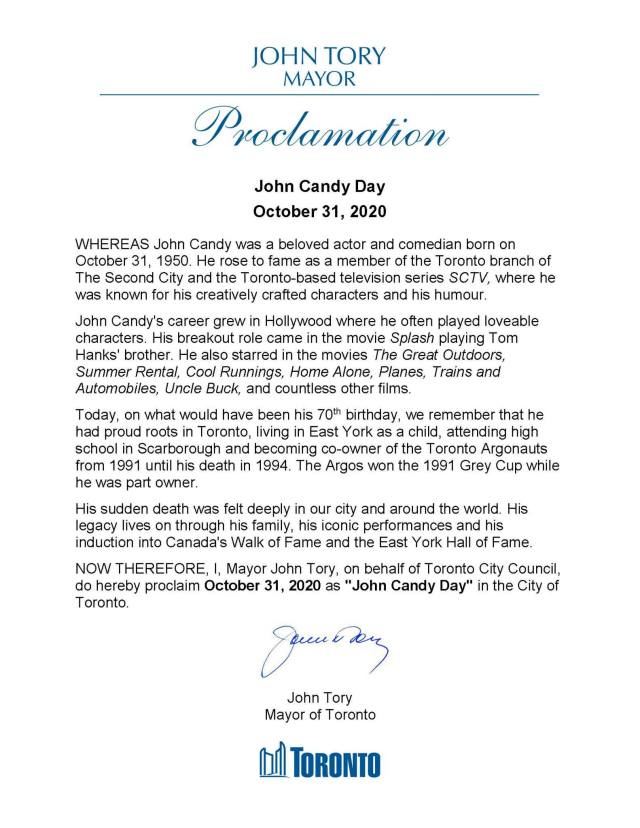 Mr. Candy would end up in movies, and starred in many movies including Planes, Trains and Automobiles, Uncle Buck, Home Alone, Only the Lonely, JFK, Cool Runnings, Wagons East, and Canadian Bacon.

He would also appear in a number of television shows other than SCTV, including King of Kensington, SCTV Network 90, and The Dave Thomas Comedy Show.

In 1991, along with Wayne Gretzky and Bruce McNall, he would purchase the Toronto Argonauts of the Canadian Football League (CFL).  He would own the team until his passing.  The team would win the 1991 Grey Cup.  At first, only Bruce McNall’s name appeared as the team’s owner, but the CFL corrected this in 2007.

Mr. Candy won two Emmys and a Gemini award.  He was married with two children when he passed away on March 4th, 1994 in Durango City, Durango, Mexico.