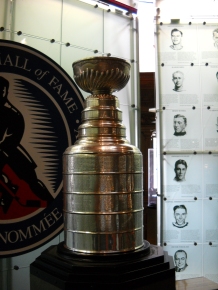 The quest for the Stanley Cup officially starts tonight.

The Nashville Predators enter the playoffs as the reigning Presidents’ Trophy winners after recording a record of 53 wins, 18 losses, and 11 overtime/shootout losses, good for 117 points.

The Pittsburgh Penguins earned their 12th straight playoff appearance and are looking to become the first team since the 1980-1983 New York Islanders to create a dynasty, having won the Stanley Cup the last two years.

For only the fourth time in history, two Original Six teams are headed to the playoffs this year:  The Boston Bruins and the Toronto Maple Leafs.  For the first time since 1966, no team from New York State has qualified for the playoffs, while all three California based teams have made the playoffs for the fifth time in the last six years.

On a side note, for the first time since the Detroit Red Wings were founded in 1926, neither the Red Wings nor the Montreal Canadiens made the playoffs.

Only two Canadian teams: the Toronto Maple Leafs and the Winnipeg Jets made the playoffs.

Let’s look at the match-ups:

The Lightning had the best record in the Eastern Conference, while the Devils won all three head-to-head meetings this year, as well as both previous meetings in the playoffs.  Look for Tampa Bay to win in six games.

The teams are the only Original Six teams in the playoffs this year.  The Maple Leafs went 3-1 against the Bruins during the regular season, and have won eight of the 14 previous playoff appearances.  The teams have combined for 19 Stanley Cup titles, with the Leafs winning 13 of those titles.  Look for the Leafs to win in six games.

This is the first playoff meeting between the two teams.  The Capitals won three of four head-to-head games this year enroute to a first place finish in the Metropolitan Division.  Look for the Capitals to win in five games.

The Penguins are looking to become the first team since 1982 (Islanders) to win a dynasty, having won the last two Stanley Cups.  The Penguins won all four meetings this year, while the Flyers won four of the six previous playoff meetings.  Look for the Penguins to win in six games.

Winnipeg won three of the four games played between the two teams during the regular season.  This is the first playoff meeting between the two teams.  The only other time teams from Winnipeg and Minnesota met in the playoffs was in 1973, the first season of the World Hockey Association (WHA).  Look for the Jets to win in seven games.

The Sharks won three of the four games during the regular season, while the Ducks won the lone playoff series between the two teams (back in 2009.)  Look for the Sharks to win in six games.