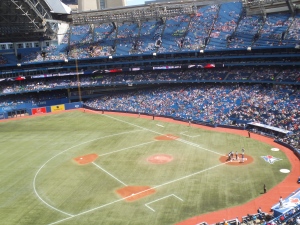 The Toronto Blue Jays have now opened their 2016 season in Tampa Bay with a 5-3 win over the Tampa Bay Rays.

The Blue Jays are the defending American League East (A.L. East) Pennant winners, and as such, there are a lot of expectations on the team to succeed this year.

The team breaks down as follows:

The starting rotation will consist of:

The bullpen will consist of the following:

The closer is Roberto Osuna.

The catcher will be Russell Martin, with Josh Thole as his back-up, and likely starting games when R.A. Dickey is pitching.

The infield will consist of:

The outfield will consist of:

Edwin Encarnación will be the Designated Hitter (and may make some starts at first base.)

Marco Estrada starts the season on the 15-day Disabled List, retroactive to March 26th.  This means that he will be entitled to start on Sunday April 10th, at home against the Boston Red Sox, placing him as the third starter in rotation (he will follow knockerballer R.A Dickey, and before Aaron Sanchez.)

However, a roster move will be required as the Blue Jays currently have all 25 men on their active roster.  Look for a reliever to be sent down when Estrada returns.

The Blue Jays are looking to appear in back to back postseasons since their run between 1991 and 1993 when they won three A.L. East Pennants and two consecutive World Series titles.