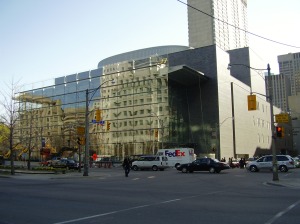 I attended the February 13th, 2015 performance of Richard Wagner‘s Die Walküre currently being performed by the Canadian Opera Company at the Four Seasons Centre for the Performing Arts.

The performance starred Christine Goerke as Brünnhilde, in her first staged version of the work; Issachah Savage as Siegmund;  Heidi Melton as Sieglinde;  Dimitry Ivashchenko as Hunding; Johan Reuter as Wotan; and Janina Baechle as Fricka.  The performance was conducted by COC Music Director Johannes Debus, with sets by Michael Levine.  The production is directed by Atom Egoyan.

Mr. Savage, replacing an ailing Clifton Forbis, was a wonderful Siegmund.  His singing is strong and rich, yet tender when required.  This was only his second performance of Siegmund and I see only more successful performances of the role in the future.

Johan Reuter’s Wotan was powerful, yet as Wotan’s plans start to fall apart is also vulnerable.

Dimitry Ivashchenko’s Hunding is a younger Hunding, not the apparently much older man that Sieglinde always seems to be married to.  Mr. Ivashchenko’s voice is strong and confident.

Janina Baechle’s Fricka is the strong wife who cannot imagine how her husband could make mistakes with his plans.  Ms. Baechle’s performance honest and makes one realize just how foolish Wotan’s plans are.

Ms. Melton’s Sieglinde is unhappy woman who only briefly finds happiness with Siegmund.  Her performance in the third act was especially moving.

The failure of this production, and it is very large in my opinion, is the production team.  The single set used throughout the production is essentially a large crumbling building with lights and metal supports coming down, or already on the floor.  Floor tiles are crumbling, the tree – supposedly in Hunding’s hut (or in this case, out in the open as there is no hut) – has fallen over.  Nothung, Siegmund’s sword, is in the stump of the tree, meaning that Siegmund has to get down on his knees to pull the sword out.  The whole set also means there is effectively little room for singers to properly move around and interact.  My best description of this set is that it is nothing more than a bombed out factory, for that is basically what it looked like to me.

Another issue, there is no hut (as mentioned above) for Act I, so there are no doors to fly open just prior to the start of Siegmund’s aria of ‘Winterstürme.‘  Act II does not take place in mountains, despite when Fricka arrives she specifically chastises Wotan for hiding in the mountains.  And there is no rock for Brünnhilde to be left on.

Plus, I found Mr. Egoyan’s directing on top of this to be confusing.  With a film background, Mr. Egoyan seemed to be looking at Die Walküre through a camera lens.  During many scenes characters would be singing directly to the house and not to each other, which was particularly annoying during the first act.  On top of this, during the third act, Wotan clearly states to Brünnhilde’s Valkyrie sisters that they are not to return to the rock (or the bombed out factory, or wherever it is that they really are.)  However, when it comes time to surround Brünnhilde with a fire, her eight Valkyrie sisters return, each carrying two torches.  These torches are placed around Brünnhilde to create the magic fire.  Did Mr. Egoyan forget to read the libretto for the third act, does he not believe that what Wagner wrote is important?  But it made no sense to me to so obviously ignore the libretto!

It’s just too bad the staging is so awful, because the singers are so wonderful!

Die Walküre continues at the Four Seasons Centre for the Performing Arts until Feburary 22nd.