2014 Stanley Cup Playoffs Round One

The following match-ups are now set: 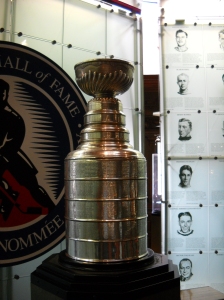 I see the Red Wings winning the series in 7 games.

The Penguins won all 5 games they met up this season.  This is the first time the two teams have met up in the postseason.  Led by Sydney Crosby, expect the Penguins to win in 6 games.

The season series was tied at 2-2.  The teams have met 10 times before in the postseason, with the Flyers winning 6 of those series, including the last three series between the teams.  I see the Rangers coming out ahead in 7 games.

The Ducks are the best team in the Western Conference, finishing 3 points behind the Bruins for the Presidents’ Trophy.  The Stars won the season series 2-1.  The 2 teams have met twice before in the postseason with the Ducks winning 4 games to 2 in the 2003 Western Semifinals, and Stars winning 4 games to 2 in the 2008 Western Conference Quarterfinals.  I would expect the Ducks to prevail in 6 games.

The Kings won the season series 3-2.  The teams have won one series each, the Sharks winning a 6 game series in the first round back in 2011 and the Kings in a 7 game series in last year’s Conference Semifinal.  Expect the Sharks to win in 6 games.

So, in a nutshell, here are the teams I expect to make it to the second round:

So let’s see what happens.