The Grey Cup game has now been set.  We will see the Hamilton Tiger-Cats play the Saskatchewan Roughriders in Regina on November 24th for the greatest title in football.

The Hamilton Tiger-Cats made it to the Grey Cup thanks to a 19-16 overtime win over the Montreal Alouettes in the Eastern Division Semi-Final and then a 36-24 come from behind victory over the East Division Champions the Toronto Argonauts.

The Saskatchewan Roughriders beat the B.C. Lions in the Western Division Semi-Final 29-25, before beating the Calgary Stampeders 35-13 in the Western Final. 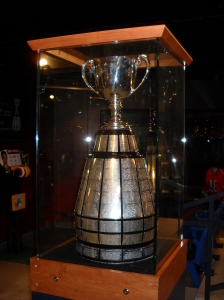 With the Roughriders win, this is the third year in a row that host city’s team is playing in the Grey Cup.  The Argonauts hosted the 100th Grey Cup last year at home in Toronto, and the B.C. Lions won at home in 2011.

In their head-to-head meetings this year, the Roughriders beat the Tiger-Cats twice:  37-0 at home on July 21st, and then 32-20 in Guelph (the Tiger-Cats temporary home this season) on July 27th.

Their three meetings in the Grey Cup breakdown as follows: